As someone who enjoys novelty in life, I am constantly amazed by how this city can keep its residents inspired. I remembered the first time I read about the Taipei Public Library Beitou Branch in the newspaper, and I was immediately fascinated by the concept behind its establishment. The idea of being completely surrounded by books and nature in Taipei never crossed my mind before this, and I knew I had to pay it a visit one of these days.

After years of procrastination, I finally had a reason to visit on a sultry Saturday in June, 2013. It wasn’t spontaneous as I intended, since I was shooting pictures of fountains all across Taipei for Centered on Taipei. One of the prominent fountains happened to be part of the library. It was where the love affair between Gigi Leung and Takeshi Kaneshiro began in the popular movie “Turn Left, Turn Right.” And if I have to pick a way to describe my first encounter with Beitou Library, it will definitely be love at first sight.

I was immediately taken away by its elegant yet edgy architectural style, and the wooden structure helps to blend it in with the surrounding nature. Unlike many fancy libraries that try to impress visitors with its magnificence, Beitou Library was built to be the model of green architecture in Taipei, a city where its urban developments in the past few decades have rapidly changed the look of the city. As I followed the trail down the direction to the library, I was mesmerized by the tranquility and smell of nature along the way. When I finally arrived at the library, the mesmerization turned into pure admiration. While I snapped a few required shots of the fountain, I spent more time purely appreciating this architectural wonder. Although my first visit was cut short due to tight schedule, I knew that admiration would draw me back here sooner or later. 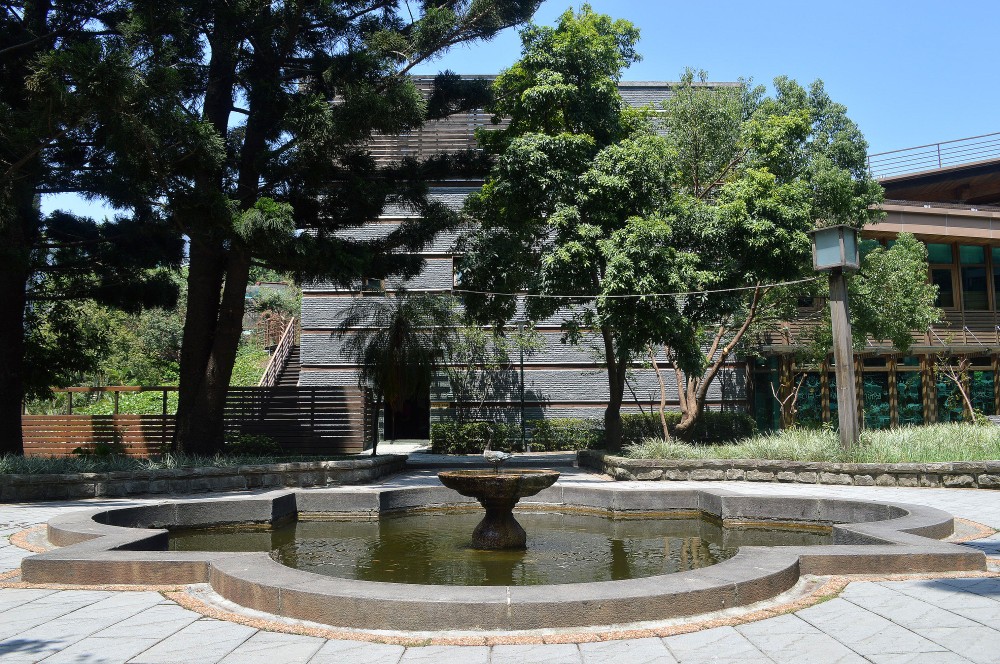 I returned after a year and this time, I came for another photography assignment for ANZ’s travel blog. It was a cloudless day in August, and it was the first time I picked up my long-forgotten camera since that memorable first trip. To reserve more time for me to thoroughly appreciate every part of the library, I made it my first stop of the day. The weather made it a perfect day to capture the beauty of this architecture, and I was able to get the shots I needed in a little less than an hour. Before I headed off to the next stop, I took a long walk around the library. As I stopped right above the stream that flowed beneath the library, I tried to think how lucky all of the Taipei residents, including myself, are to have places like this in the city. It is more than just a building storing books and knowledge, because it offers us a tranquil place to stay away from all the buzz in the city. However, little things like this are often taken for granted, and eventually considered essential to city dwellers.

Now, whenever I feel the urge to look for my source of tranquility after a long day at work, I always turn to the set of pictures I took of this architectural wonder. Only by reminiscing the appreciation I had in mind, can I truly reset myself.